Cats come in a wide variety of colors. We humans were probably instrumental in the proliferation of all these colors. Although showing pedigreed cats as a hobby is only around a century old people have been keeping cats as pets for millennia. Cats kept as pets have a relatively easy life, and undoubtedly are more likely to live to reproduce than a wild cat or a street cat. Pretty and/or unusually colored kittens have probably always been more likely to get a nice warm spot by the fire and a few more handouts than the average cat.  Better living conditions allowed them to reproduce more pretty and/or unusual kittens.

Some breeds come in only one color.  In CFA (the Cat Fanciers Association) six of our thirty-something breeds come in only one color, the Chartreux, Korat, and Russian Blue are each in a shade of gray (called blue in the cat fancy), the Bombay is only black, the Havana (is) Brown, and the Singapura solely sepia agouti ticked. All the other breeds come in a multiple of colors, from 3 for the Egyptian Mau to 73 for Devon Rex (not including the several tabby patterns, and varieties of bicolors, which add many more possibilities). The thought of having to understand over a hundred different colors is daunting. Fortunately, all these colors can be reduced to a small number of modifications of a very few colors.

There are only four basic colors in cats, black, chocolate, cinnamon, and red
all the other colors are variations/modifications of these four

In fact there are only four (depending on how you define red) pigment colors in domestic cats; black, chocolate, cinnamon, and red. Red is actually a modification of the other three, but since it results in one distinct color, we'll count it as a basic color.

These four colors can seem like more because there are the modifying effects of tabby patterns, Siamese, Tonkinese or Burmese color restriction, silver undercoats, and bi-color white spotting.

To add to the confusion, colors are called different names depending on the breed in pedigreed cats. For instance, take black - in CFA it's "ebony" in Orientals but is called "brown" when in a tabby in many breeds, though still ebony tabby in Orientals, "bronze" in Egyptian Mau, "tawny" in Ocicats, and ruddy in the Abyssinian and Somali. In pointed Siamese, Himalayan Persians, and Colorpoint Shorthairs, black becomes "seal", in Burmese it is "sable", and in the color-hybrid Tonkinese it is "natural mink". In cats that are also silver the reference to a dark shade often completely disappears but the black is still there in the eyeliner and nose rims in shaded silvers and chinchillas.  However, in all of these cats the rim of the nose and the paw pads are black.
Take away the silver and/or tabby and/or pointed color, and you have a black cat.

The actual dark brown pigment in a Havana Brown is called brown, chocolate, and champagne.

The next color in the series is called cinnamon, and is a light warm brown, the color of a cinnamon stick.  This color is sometimes called sorrel, and in Tonkinese is referred to as "honey mink".

One name change that is important to note is red. Red in Abyssinian and Somali is the color called cinnamon in other breeds. Red, known as orange by the casual observer, in other breeds is a completely different color both by sight and by genetics. Therefore, for the purpose of this article, Abyssinian red will be called cinnamon.  Since red color is not genetically related to black, chocolate, and cinnamon, and it's inheritance is dependent on the sex of the cat, I'll devote a "red" section just to it.

You may have noticed that I haven't mentioned white, the other solid color in cats. That's because white is completely separate from the rest of cat color genetics. It results from the death of the pigment producing cells during fetal development. It affects are completely independently from the rest of coat color genetics.  So, as with red, white and part-white colors will have their own article.

If you are not familiar with  the terms dominant, recessive, homozygous, heterozygous, gene, and allele, you might want to take a look at the section on Mendelian genetics.

Black, Chocolate and cinnamon are all alleles of one gene.

Black, and the less common chocolate, and even rarer cinnamon, are all pigment colors inherited in a straight-forward fashion. Each cat has two, not necessarily identical, copies (or alleles) of these color genes (black, chocolate, or cinnamon), one from each parent. Each cat in turn passes one of it's two full color alleles to each of it's kittens. All of these colors are caused by pigment granules of one protein (melanin). The black color allele (B) causes this pigment to be laid down in thick round granules on the hair, the melanin is so thick that the hairs are opaque black. The chocolate color allele (b) causes the melanin to be laid down in thinner more oval granules that are more transparent, letting some light through and appearing brown.

All of these colors are referred to as "dense" colors.  Although the color granules are of different thickness in all of these the dense color cats, under a reflecting light microscope the hair is quite evenly colored as if it was painted or dyed, the individual granules are too small to be easily seen. In dense color tabby hairs (such as ebony or chocolate tabbies), where each hair has areas of the dark pattern color and areas of lighter undercoat color, the dark color smoothly graduates into the lighter color.

A completely separate gene controls this smooth coloration of individual hairs. This gene has two alleles, dense (D), and dilute (d). This gene is not a color gene the way that the pigment granule genes are. This gene controls how evenly the hair is colored, not the color of the pigment itself. The D allele causes the granules to be evenly and smoothly spaced. The d allele doesn't do as good of a job coloring the hair, clumping lots of granules on the hair at one time and putting far too few in at others. Cats have two alleles of the gene and may be D/D, D/d or d/d. As with the pigment genes the dense color dominates, so a D/D cat looks just like a D/d cat.

Individual hairs grow from the roots, which are follicles in the skin, so each cell that dies and becomes part of the hair pushes the previous cell out and away from the skin. These dead cells, stacked up, form the length of the hair.  You can think of a hair as being made of a very tall stack of poker chips.

In a black, densely colored, hair the poker chips are all black. In a "brown" tabby the chips are black at the top then gradate smoothly to tan. This is repeated according to the number of "bands of ticking" in the individual tabby. In a silver tabby hair the stack is black at the top, the gradates smoothly into a translucent white.

However, in a dilute cat (d/d) with black pigment granules the stack of poker chips is a random mix of black and off-white. To the naked eye the unevenness is not really apparent. The black and off-white blend to make gray, or blue, cats. Under the microscope the strips of color are clearly visible and there is a dramatic difference between the smooth densely colored hair and the randomly striped dilute hair. A blue tabby hair has a tip with random layers of black which fade to random layers of tan, and repeat. A blue-silver tabby hair goes from random black layers to translucent white. To the naked eye the fur appears gray banded with buff or silver.

Blue (gray), lilac, fawn, and cream are caused by the "dilution" of black, chocolate, cinnamon, and red respectively.

Each of the four dense pigment colors has its corresponding dilute. By eye the dilute is lighter and a little cooler with a slightly softer, dusty caste. Black d/d cats are blue, chocolate d/d cats are lilac, Cinnamon d/d cats are fawn, red d/d cats are cream. Under the microscope each of these colors is easily distinguishable from the dense color. Even on a cream hair the red and off-white random strips of color are clearly visible.  The color in dilutes is unevenly applied to the hairs, leaving off-white gaps and almost a bar-code like hatching which is what produces the lighter, slightly dusty looking color to the naked eye.  For picures of full color and dilute hairs taken through a microscope, see below, for some tabby equivalents look here. 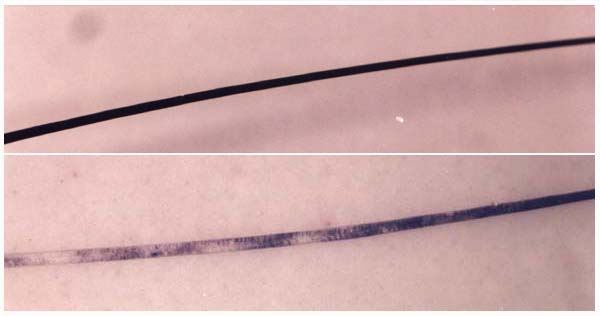 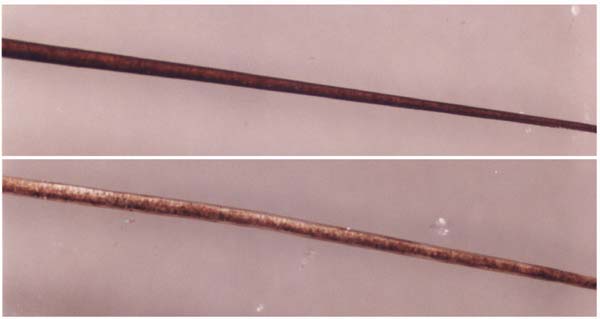 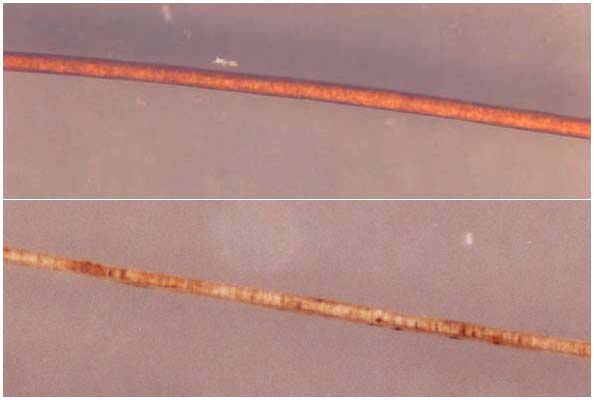 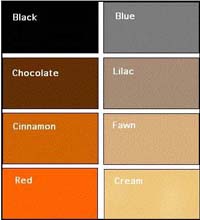 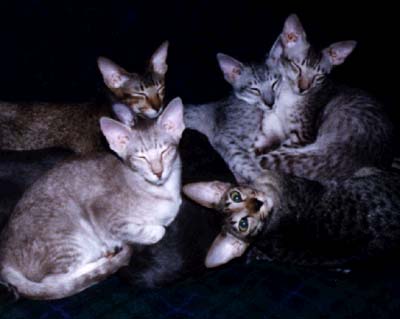 The take home message is that there are four basic dense colors in cats, black, chocolate, cinnamon, and red. The appearance of each of these colors is affected by dilute genes, changing black to blue, chocolate to lilac, cinnamon to fawn, and red to cream. Thus, for instance, there is no lilac "gene", but there are cats which are chocolate and dilute and are therefore colored lilac. Similarly, a cat can't "carry" lilac, but may be a black (or seal-point) that is B/b and D/d, in other words carries both chocolate and dilute.

@ Heather E. Lorimer, do not reproduce without permission

Back to Synergy Homepage
Feline Genetics