Eye Color in Oriental Shorthairs (and other cats)

What's green and what's not?  What makes a cat's eyes green in the first place?

Synergy Orientals with an assortment of eye-colors ranging from yellow to blue
I have been having a hard time getting green and blue-green to scan and reproduce well on the computer,
but I think that you can get the idea from the above anyhow.

There are two major factors that influence the eye-color of a cat.  First is the actual pigmentof the iris.  This color is caused by the biological pigment melanin, and in cats ranges from very pale yellow or tan to deep orange or brown.  Second, the "transparent" structures of cat eyes actually absorb and refract light like "clear" glass does.  If you look at a sheet of glass on edge, it usually appears green or blue.   In cats the end result is transparent blue, ranging from nearly colorless to deep indigo or purple-blue.  The combination of these two factors produces the actual color of the eye.

The end result is somewhat like putting an oval of blue glass over the opaque melanin-colored iris.

In cats that are true albinos, as in the rare AOV Siamese in CFA, there is no melanin made, iris is a pale pinkish white, and the final eye-color is blue.  The same holds true for the partial albino Siamese colored pointed cats, and in dominant solid white and/or piebald white cats in cases where the effects of those color genes extends to the iris of one or both eyes.  The shade of blue is then completely dependent on the variable factors that control the intesity of the blue refraction. 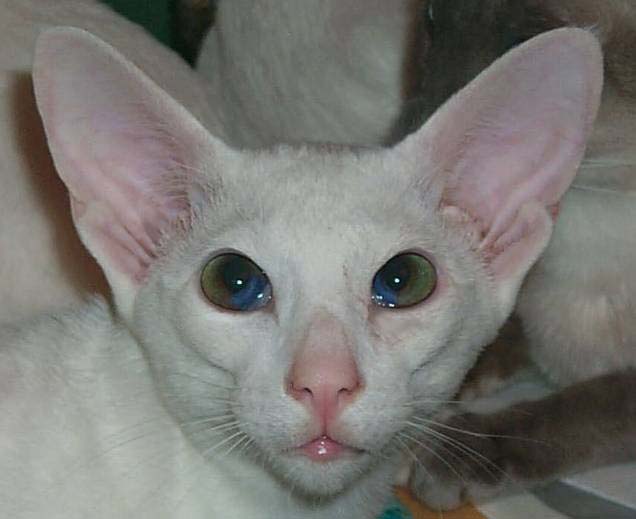 On the other hand, if the iris is a dark brownish color, the blue overlay may not have much effect, so it is theoretically possible to produce an odd-eyed Persian with one brown eye and one medium blue eye.

In a few Orientals and shaded silver Persians, eyes that are more blue than green have occurred.  In particular there has been a group of related Oriental Shorthairs that have had eyes that are almost Siamese blue (see below).  These cats originally arose in the offspring of some blue-eyed white Orientals who were pointed under being white.  The whites were from a breeding program that selected heavily for deep, dark blue eye-color. To date, these blue eyes appear to be polygenetic, not due to an unusual single gene trait or mutation.  Offspring of one of these blue eyed, but normal body colored cats, and a typical yellow-green eyed Oriental, or a pale blue-eyed pointed cat, have had eye colors ranging from rich medium green to teal or aqua blue-green.  Two completely blue-eyed full body colored Orientals have not been bred together yet.  Below are examples of these eye-colors, the smoke and the right-hand tabby have the blue-blue eyes, the others are offspring of the bluest-eyed cats.  The top right cat is the father of the girl (Ch Synergy Nimue) next to him and the boy (Ch Synergy Scimitar) and girl (GRC asadecano's Moonshadow of Synergy) below 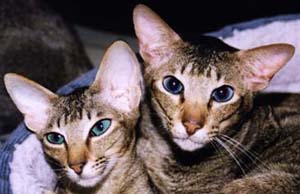 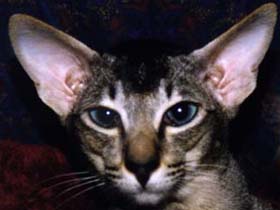 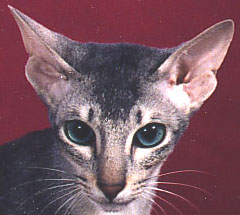 In the third generation I'm still seeing the blue eyes, acting like an autosomal dominant with variable expression  Below left seeSynergy Free Radical son of Scimitar above left and a yellow-green eyed queen, to his right is his non-blue-eyed brother, who has basically the same eye-color as their mother. 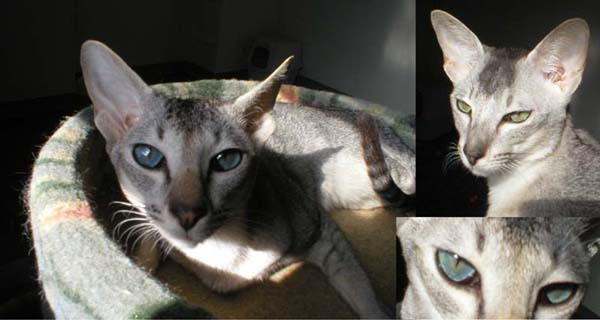 The same is true in the fourth generation Below is Free radical's lynx-point daughter and blue-eyed tabby son, mother a deep blue eyed Colorpoint/Siamese Synergy Desdemona.  The little girl has her mother's eye-color. 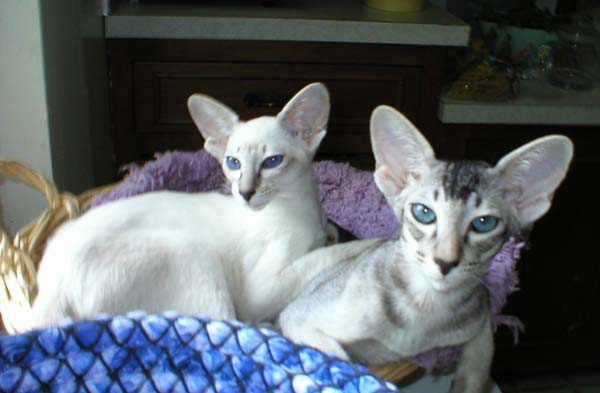 As an example.  Ladyhawke is a seal-lynx-point Oriental with very pale blue eyes.  She had 4 litters of kittens before she was spayed.  The first two litters were from a male cat with yellow-green eyes, and all of the kittens had yellow to yellow-green eyes.  The second two litters were from "Muddy" one of the blue-eyed Orientals.  All of those kittens have green to teal eye color. 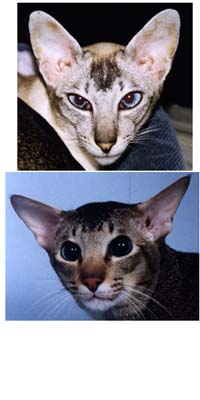 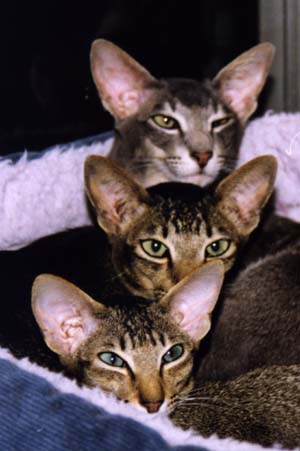